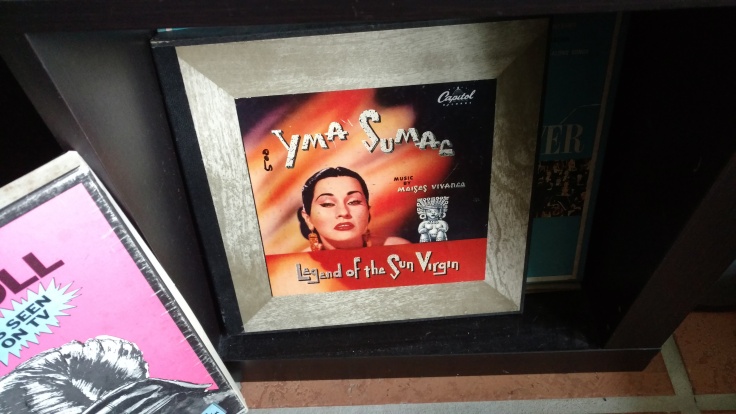 The ex-girlfriend and I, we used to go to thrift stores all over the little swath of eastern North Carolina that we were sentenced to all the time. Funny, I still live there, and still go to the same thrift stores, though not nearly as much as I used to. She? I don’t have a clue.

But one day we were in Farmville. A small town that I’d never heard of, and wouldn’t go back to again until almost a decade later – for a job.

That day, we just decided to take the road to the town. We used to do things like that. Go to a town via the highway – such as Goldsboro or Wilson or Raleigh – and then take some back roads way home to see where it led us. I saw the sign for Farmville at a blinking red light – it blinked yellow on the main stretch, which we were not on.

It was a simple barter system we had. If I wanted something, I’d offer something in return. If she wanted something, she did the same. It was one of the reasons I fell in love with her. She liked to play the little game. And seemed to enjoy it as much as I. And, she didn’t mind my searching endlessly in thrift stores for vintage video games, LPs and glasses from all over the country. Such were my passions then. Two of the three still are. Don’t know why I lost the want of video games. I think it’s because the supply dried up. It got too hard to find them “in the wild.” And I hated buying ‘em on ebay and such.

We got to Farmville and it wasn’t much. A pretty little place that seemed to be lost a bit in time. Not like it was the 1950s there or something, but maybe 1987 or so.

I saw a Salvation Army and knew we’d be going in. If it was open.

Pulling up to the shop, the sign said “Yes, We’re Open!” and parked.

“Let’s see what we find,” I said enthusiastically.

“Alrighty,” she responded. I loved the – what I called almost Wisconsiny accent she had, although her mom came from New Mexico and her dad, I have no idea – and smiled at the sound of that reply.

“What are you smiling about?” she asked.

“Just you,” I said, meaning it completely.

We walked in, hand-in-hand, the little bell jingling as we pushed the door.

“Howdy, folks,” the lady at the cash register spoke to us. She had on a green shirt with some kind of logo on it. And purple pants. “Let me know if I can help you with anything.”

We wandered about the place – her looking at clothes, as always – me looking at everything but.

I noticed some LPs and started rifling through them. They were the usual: Roger Williams, Glen Miller, Liberace and lots of Christmas albums. I saw a Pete Seeger one, but it was rough. Then, I noticed a pile of old 78s. And among them was a box set – Yma Sumac “Legend of the Sun Virgin”.

Immediately, I had to have it. The price tag said $10. A bit much, I figured, for some old 78s that I’d never play, most likely, but something that I had to have. A compulsive spender of little amounts of money I’ve always been. And this was just a symptom of the stupidity that would lead to maxed out credit cards, road trips to nowhere and everywhere, rental cars and huge bar tabs.

“What’s that?” she said to me, her red hair shining under the light coming inside the old dusty store from the gigantic front window. I watched the dust in the light almost put on a show around her head.

“It’s some kind of cool old box set. But look at that art!” I said pointing to the box.

“Oooooooh, that is cool,” she responded. She stared at the box, opened it and then shut it. I loved that she played along with my silliness. Didn’t try to change that in me.

“You find anything?” I asked.

“Nah. It’s slim pickin’s over there. Let’s get out of here. You owe me a sandwich.”

“I sure do,” I said grabbing her arm.

We went to the cash register and plopped it down. That’s when I saw it. In the case was an almost brand new looking Intellivision II. Boxed and looking pristine. It also had a $10 price tag. I looked in my wallet. I had a ten, a five and four ones. Not gonna cut it. I’d have to choose.

In my head I debated. That video game was ultra cool. So was the album.

“You have a couple bucks I can borrow?” I asked.

I then made the decision. I’ll come back later and get the Intellivision II. But I’ve got to have this album. Even though I’ll probably never play it.

I never went back to get the Intellivision II. But I did play the album.

And was shocked that the music was actually used in the soundtrack to “The Big Lebowski.” And that made my day.

Now, tonight, years and years later I’m watching Charlton Heston in “Secret of the Incas” in Raleigh. “Secret of the Incas” is the movie where old Charlie wears an outfit that had to be stolen by either Stephen Speilberg, George Lucas or Harrison Ford when they made “Indiana Jones.” It’s a dead ringer, proving that nothing is original anywhere, no matter how much you think it is. I’m on a couch, hanging out with two dogs and an empty bag of tortilla chips. The opening credits of the movie feature the exact same song. And I remember that day in Farmville.

Funny how memories come back.

One thought on “Yma Sumac in a Farmville, NC, thrift store”