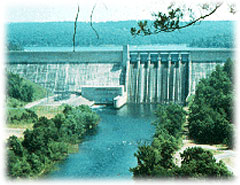 I got into the cab of the truck and shut off the engine. The gas tank was in “E” and I figured it had been running for quite a long while.

The road sign told me Searcy was a mile away, I decided to head a different direction. A skull-splitting headache and a red hair wig sort of told me it would be the best idea I’d had in at least 40 hours.

Luckily, in the back of the truck were still a gaggle of Lone Star. I grabbed one and made a necklace around my neck out of the plastic from the six-pack. My roommate from the University of Virginia used to make them all the time. Thought it was the most ingenious thing ever thought of. Of course, he’s a lawyer now. Me? I’m a homeless, unemployed writer. Well, mostly unemployed. You’re only unemployed totally if you’ve stopped. I haven’t stopped. At least not yet.

After walking for two beers worth of steps, I saw a sign for the Little Red River.

“Sounds like a plan,” I thought, popping the top of beer No. 3. My headache now dulled just a little from the beer.

The crunch, crunch, crunch of the rocks under my feet made for a soothing bit of numbness. I always found comfort in such things. The popping of popcorn at a baseball stadium. The flushing of a toilet in a crowded airplane. The squeaking of springs in an old school bus.

I saw a shaded spot near what I guessed was the river a few blocks ahead. Country blocks, not city blocks.

Once I got there, I saw left-overs from fishing excursions gone by. Old lures with bent hooks, rusting away in the muck. A couple of Busch Light cans. A Gatorade bottle, still containing some electrolyte sugar water. Some ants were devouring a piece of a cheeseburger from Burger King. A crow cawed in the distance.

I took my shoes off and noticed my socks were bloody.

I hadn’t looked at myself when I was back at the car, so this bit of CSI’ing had slipped. I saw a recreation area some ways away where I could go assess myself and any damage. I walked over, and just as I got to the little wooden wash house and bathroom, a teenager appeared out of nowhere.

He was wearing a shirt from the last presidential election. “Make America Great Again.”

I wondered what this kid, no older than 15 thought of when he thought of the Great America. I decided not to ask when he took a Mountain Dew bottle and spit a bit wad of tobacco into it.

“Mister, what happened to ya?” he asked, rather innocently I later would remember it.

“Just had an accident,” I replied.

“Looks like more than a accident,” he said, looking me over.

“In life, there aren’t many real accidents,” I said. “Just decisions that lead to outcomes.”

“That bathroom really stinks,” he said, pointing at the men’s room. “I’d go in to the girls.”

“De nada,” the kid said with a wry grin. He walked to the back of the little hut and I never saw him again.

In the girls’ bathroom, there was a rather pleasant scent. Not what I was expecting at all. I ambled over to the mirror and saw the carnage. I had caked mud and blood everywhere. On the left side of my face, a gash about three inches long was most likely the source of the red part. The skin sort of flapped over, but it had hardened, so it didn’t really flap anymore. It just sat.

I took a swig of Lone Star. This was going to hurt.

After turning the water on and letting the sink fill, I dunked my head under. It stung, but it felt oddly refreshing. Almost enough to keep it from hurting. But not 100 percent.

I repeated this process about a dozen times until most of the mud and blood was in the sink instead of on my face. I went over to the towel dispenser. Empty.

I looked at the hand dryer.

I pushed the button.

I stuck my head underneath, holding on to the flap of skin that was not flapping instead of sitting.

Then the door opened.

A sheriff’s deputy walked in.

She had red hair.

“Sir, I’ll need you to step outside,” she said.

“Ok,” I replied as the dryer stopped. “Just cleaning up.”

“Well, some kid told me that men’s room stinks real bad,” I said.

“Really?” she replied. “Because it sure does. From the dead guy inside probably.”

She now had her gun pointed at me. I knew the drill. I laid down on the ground and put my hands behind my back.

“No worries,” I replied.

Soon, I was in the back seat of a police cruiser. The scanner was on. So I heard about the ambulance coming to pick up the dead person in the men’s room.

Next came the media.

I was kind of surprised when a beat up old television truck showed up. I saw an ABC logo and the number 7.

I remembered a guy I used to know in North Carolina had moved to Arkansas to work for an ABC affiliate. He was a cameraman.

“Randy?” a muffled voice came from the right window.

And there he was, Jarratt. Boyish good looks still intact.

I waved with my handcuffed behind my back hands and gave a sly grin.

Jarratt went over to his reporter, chatted a moment, then came back.

“We’re not going to film ya,” his muffled voice said through the glass. “But if you’re still in jail tomorrow, we’ll have to use your name.”

I nodded. Jarratt went away. Figured I’d never see that guy again when he left eastern North Carolina five years ago. Now, I’m glad he did.

The red-haired police officer opened up her door and got inside.

“Alright, we’re going to go to the station,” she said. “Get a statement from you.”

“Before or after Miranda?” I asked.

She gave me an evil look in the rear-view mirror.

She then read me Miranda and we drove into town.

“Finally made it,” I sighed.